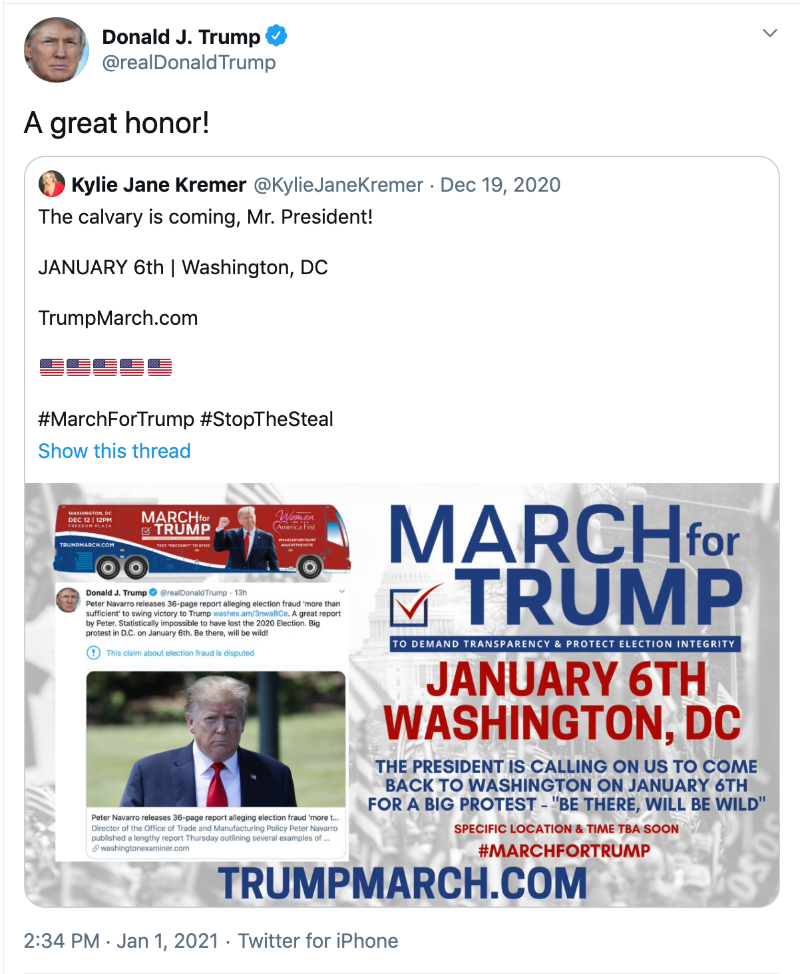 President Donald Trump announced that evidence of alleged election fraud will be presented on Jan. 6 during the Joint Session of Congress.

“Massive amounts of evidence will be presented on the 6th. We won, BIG!” Trump wrote on Twitter.

It comes as Sen. Josh Hawley (R-Mo.) and about 40 House GOP lawmakers have announced they would challenge the Electoral College votes during the Jan. 6 Joint Session of Congress due to alleged fraud and irregularities during the Nov. 3 election. The challenge could lead to several hours of debate during the session.

The challenge is supported by Trump, who, in recent weeks, has met with House lawmakers, including its chief sponsor Rep. Mo Brooks (R-Ala.), at the White House.

Trump’s adviser, Jason Miller, told Newsmax earlier in the week that the team is aiming to present more evidence.

“We will have a chance in front of the American people, next week to present these cases, all these evidences of fraud,” Miller said, pointing to a lawsuit filed by Rep. Louie Gohmert (R-Texas) against Vice President Mike Pence earlier this week to prevent him from confirming Joe Biden’s electoral victory. Pence’s lawyers with the Department of Justice later said Pence isn’t the person who should face a lawsuit, arguing that Gohmert should have sued Congress.

If Hawley and the other lawmakers challenge a state’s Electoral College votes, Trump’s campaign will make their presentation. The challenge requires a senator and a representative to carry out.

Miller pointed to law changes regarding mail-in ballots in Wisconsin and other states, “suitcases of ballots” in Georgia being wheeled out late at night on Nov. 3 in Atlanta’s State Farm Center, and officials in Michigan and Arizona allegedly blocking them from inspecting voting systems. State election officials in those states have denied claims from the Trump team and third-parties about voter fraud and irregularities.

‘Massive Amounts of Evidence Will Be Presented’ on Jan. 6: Trump

Folks, I have just been given word we have an anonymous donor who will pay for any and all buses moving forward, which have not already been paid for, going from Pennsylvania to DC for the Rally on January 6th

I have named Ed Kroupa as the Official PA to D.C. Bus Captain and I would ask you to coordinate with him via email and text. He will need your location and contact information of each patriot traveling. 50 max per bus.

No weapons of any kind are permitted on the buses!!!

Author of “The Reverse Diet”

“No Excuses, Only Solutions”

The senators are asking the state’s largest county to make the ballots “available for inspection” through a method outlined during the hearing by digital ID systems inventor Jovan Pulitzer.

Pulitzer suggested all absentee ballots in the state of Georgia be forensically examined and fraudulent ones identified in just a matter of hours. He called on state officials to allow the examination.

Officials in the Georgia Secretary of State’s office didn’t immediately respond to requests by The Epoch Times for comment on the subcommittee motion.

“Fulton County did not participate in today’s hearing,” county spokeswoman Jessica Corbitt-Dominguez said in an email to The Epoch Times. “We will continue to collaborate with the Secretary of State and General Assembly as we execute elections in compliance with all applicable state and federal laws.”

Georgia is one of the states where election results are being contested by the campaign of President Donald Trump and others. The current count in the state shows former Vice President Joe Biden ahead by some 12,000 votes.

Georgia Senate’s Election Law Study Subcommittee unanimously passed a motion during a Dec. 30 hearing to request an audit of absentee ballots in Fulton County. The senators are asking the state’s largest county to make the ballots “available for inspection” through a method outlined during the hearing by digital ID systems inventor Jovan Pulitzer.

Sixty-year-old Robin, a retail merchandiser in rural Virginia, hasn’t visited the nation’s capital in more than two decades or ever taken part in organizing a political event, although she was quick to volunteer to manage a stop for one of the four vehicle caravans headed to Washington for what many are calling a historic protest on Jan. 6, 2021.

In an unprecedented request, President Donald Trump asked his supporters to travel to Washington for a “big protest” on Jan. 6, when a joint session of Congress will be held, during which lawmakers will vet the Electoral College votes cast three weeks prior.

A number of House Republicans have committed to challenge the slates of electors from six states where the president has disputed the validity of the election’s outcome.

“Be there, will be wild!” the president wrote on Twitter on Dec. 19. A week later, he added, “See you in Washington, DC, on January 6th. Don’t miss it. Information to follow!”

A Michigan man who goes by the nickname Dr. ENoCH on Twitter is organizing the larger caravan effort, which encompasses 20 cities along four routes. He told The Epoch Times that considering the size of the two prior post-election Trump events in Washington—which the president didn’t call for or endorse ahead of time—the Jan. 6 event is on pace to become the biggest Trump rally so far.

Sixty-year-old Robin, a retail merchandiser in rural Virginia, hasn’t visited the nation’s capital in more than two decades or ever taken part in organizing a political event, although she was quick to volunteer to manage a stop for one of the four vehicle caravans headed to Washington for what many are calling a historic protest on Jan.

Gallup: Trump is America’s ‘Most Admired Man’ for 2020 – The National Pulse

Rep. Louie Gohmert (R-Texas) filed a lawsuit against Vice President Mike Pence in a bid to overturn the presidential election results, asking a court to give Pence “exclusive authority” to decide which Electoral College votes should be counted.

According to the lawsuit (pdf), Pence has a role in the upcoming Jan. 6, 2021, joint session of Congress to count all 50 states’ Electoral College votes. Gohmert’s lawsuit, which was filed against Pence in his capacity as vice president, is asking a federal judge to strike down the 1887 Electoral Count Act and to grant Pence the authority to overturn the election results in favor of President Donald Trump.

Gohmert’s lawsuit is claiming that any action taken by Pence on Jan. 6 to certify the Electoral College results to secure a win for Joe Biden will be fraudulent. Gohmert is also asking Judge Jeremy Kernodle, a Trump appointee, to determine that Pence is authorized to pick GOP electors who cast votes for Trump during the Joint Session of Congress.

The White House and Pence’s office didn’t immediately respond to a request by The Epoch Times for comment.

It adds that the 12th Amendment of the U.S. Constitution “contains the exclusive dispute resolution mechanisms” over elections.

The court should render a judgment on whether “Vice President Pence, in his capacity as President of Senate and Presiding Officer of the January 6, 2021, Joint Session of Congress under the Twelfth Amendment, is subject solely to the requirements of the Twelfth Amendment and may exercise the exclusive authority and sole discretion in determining which electoral votes to count for a given State, and must ignore and may not rely on any provisions of the Electoral Count Act that would limit his exclusive authority and his sole discretion to determine the count, which could include votes from the slates of Republican electors from the Contested States,” Gohmert’s lawsuit says.

Gohmert noted that GOP-selected electors in several key states being contested by Trump have cast votes for Trump and Pence. The Republican parties in the states said they did so to preserve lawsuit options for the president. Electors that were certified by the key states’ executive branches cast votes during the Dec. 14 Electoral College vote, giving Biden 306 votes to Trump’s 232 votes.

Meanwhile, Gohmert said in the suit that he’s joining a GOP-led effort to challenge the Electoral College vote-count efforts on Jan. 6. The bid, which is being led by Rep. Mo Brooks (R-Ala.), has dozens of supporters in the House, Brooks told Fox News on Dec. 28.

Trump has supported the effort led by Brooks and the other Republican lawmakers to challenge the counting. But so far, it’s not clear if any senators have joined, which is needed to carry out the challenge of the electoral votes.

Rep. Louie Gohmert (R-Texas) filed a lawsuit against Vice President Mike Pence in a bid to overturn the election results, asking a court to give Pence “exclusive authority” to decide which Electoral College votes should be counted on Jan. 6. According to the lawsuit (pdf), Pence has a role in the upcoming Jan.